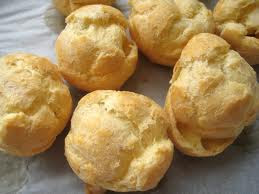 When I was growing up my mother cooked everything from scratch, she loved to cook - still does. I honestly did not know a pie crust could come from a box or the refrigerator section of the grocery store, that spaghetti sauce came in a jar, or that corned beef hash was sold in a can for quite a long time. In the spirit of 'preserving' I decided to revisit another one of my favorite childhood treats, my mother's recipe for cream puffs.

She made them small for finger-food appetizers stuffed with baby shrimp, egg salad, ham salad, and custards, cremes, or curds, or she would make large popovers then fill them with vanilla ice cream and drizzle with a fudge sauce. Such a special treat!  When  I asked my mother for the recipe for the 'popovers' she used to make, she told me she never made 'popovers', but she had a recipe for 'cream puffs'.

'Well, were the large ones popovers and the small ones cream puffs?"
I inquired.

"I never made popovers," she insisted. "Those are made in the pan, Yorkshire Pudding, to serve with roast beef," she told me.  "I made cream puffs in two  sizes, large and small."  So she gave me her recipe for 'Cream Puffs',  and I started researching the difference between the two.  This is what I learned.

Before the advent of a reliable baking powder in the mid 1800’s, a few alternatives to making yeast-raised breads were popovers or cream puffs.


The popover (aka Yorkshire Pudding) is the first cousin of the cream puff, as they both contain the same basic ingredients in slightly different proportions. Yorkshire Pudding is actually popover batter made with drippings from roast beef and baked in a large pan. Popover batter is quite thin.

Cream puff dough, on the other hand, is thicker.  Both the popover and the cream puff are leavened by the steam that forms in the first few minutes of baking. Magically, simple mixtures of egg and flour pouf into fluffy, golden mounds.


Most likely the name popover came about because the batter ‘popped over' the edge of the pan when baked. In fact, cast iron pans resembling muffin pans, but with straighter sides, were made specifically for baking popovers.

There are so many “comfort” foods I can think of that came from our kitchen in the Old Mill, my childhood home nestled in a rocky bend of the East Aspetuck River in Connecticut. Everything from fresh trout dredged in flour and grilled in an iron pan to Bread and Butter Pickles to Country Captain Chicken ( which was my one of Uncle Dick's favorites), but when mom would entertain and create Cream Puffs, I and all my siblings, inevitably ended up in the kitchen staring through the oven window anxiously awaiting the rising of these versatile little treats.

Do not peek in at the cream puffs (or popovers) during baking. Opening the oven door lets in cool air, this will condense the steam inside the popovers and cause them to collapse.

Bring water to a boil in large pot, melt butter in boiling water. Add flour and salt all at once; stir vigorously. Cook, stirring constantly, until mixture forms a ball that does not separate. Remove from the heat and cool slightly.

Add the eggs, one at a time, beating after each addition until smooth. Drop by large, heaping tablespoons, about 3” apart on a greased cookie sheet.

Bake at 475 degrees 15 minutes, then lower temperature to 350 degrees and bake for another 25 minutes. DO NOT OPEN OVEN!

As the cream puffs complete the last few minutes of baking remove them from the oven, prick them with a fork or split open, to prevent sogginess. At this point, the structure of the popovers has been set, so they will not collapse.

Turn oven OFF and put the cream puffs back in the oven to dry, another 10 to 15 minutes.

Store in an airtight container. To crisp them up before serving place on a baking rack in       475 degree oven for about 3 - 5 minutes.

Just before serving, fill cream puffs with ice cream or lemon curd, creme fraiche or custard, drizzled with honey or fudge sauce or confectionery sugar, the possibilities are endless.

The following recipe for popovers comes from the Incredible Edible Egg website.  You can see from the ingredients that only a few degrees of difference separate Popovers from Cream Puffs.

Don't have a proper popover pan? A muffin pan can be substituted for a popover pan. You can even place  6-oz. custard cups on a baking sheet and still make a beautiful popover. 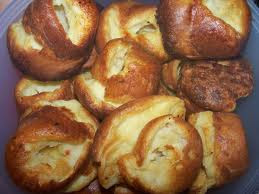 Heat oven to 425°F. Beat eggs in mixer bowl on medium speed until foamy. Beat in milk and butter. Reduce speed to low. Add flour and salt; beat until smooth, about 3 minutes.

For crisper popovers, pierce side of each popover with tip of knife and bake 3 to 6 minutes longer. Loosen edges with knife, if necessary. Serve immediately.

SWEET POPOVERS:  Add a spice or grated citrus peel to batter and serve with preserves or honey.