I wanted to pickle some cauliflower. When researching recipes for pickling cauliflower I found most recipes included mustard or mustard seeds (rai), fennel seeds, red chili powder, turmeric (haldi), and asafetida (hing). Of course, there is always the popular Piccalilli also known as 'Spiced Mustard Pickle', as well as other variations of a mixed vegetable pickle such as Chow-Chow, which always includes cauliflower as well as carrots, onions, runner beans and the like, another mixed vegetable relish that includes mustard in the brine, none of which you will find in this recipe. This Red Cauliflower Pickle recipe I discovered after finding 'Farewell The Winterline: Memories of a Boyhood in India. A Memoir by Stanley E. Brush'.


According to the website, "Stan Brush's love for the peoples and cultures of India and Pakistan infuse his memoir...And it is appreciation of those cultures that inspires the continual development of this web site." Best of all they offer a free Indian Recipes Cookbook.

Paul and I had recently purchased a big, old Victorian in Connecticut's Northwest Corner, so when the harvest was coming in, my pots, pans, and canning supplies were lost in transition. This recipe was certainly on my to do list but because of circumstance set simmering on the back burner.

Finally the time was right. The produce department had beautiful heads of cauliflower lined up bright and white, so crisp, so pristine: and canning equipment had been unpacked. I bought two bulbous heads and several jars of Greenwood's Sweet and Tangy Sliced Pickled Beets with Onions so I could give this unique recipe a test run. I also purchased a few organic golden beets to add to the mix for a little more color.

Here is the original recipe as it appeared in the Indian Recipes Cookbook.

'This is a very uncommon pickle, and looks particularly pretty in white bottles. Cut the cauliflower into pieces of equal sizes, sprinkle with salt, and place it in the sun for a couple of days. Make a syrup of vinegar and sugar: to every quart of vinegar put a quarter of a pound of sugar, a few sticks of cinnamon, and as much sliced or bruised and pounded red beet as will give the vinegar a deep red colour.

When all the salt water has drained away, put the cauliflower into a pan, and pour over it the boiling-hot vinegar or syrup through a fine sieve, in order to leave behind the sticks of cinnamon and fibres of the beetroot; when cold, put the pickle into nice white bottles and cork.'

Here is the version I ended up with after a bit of experimentation.

Kosher Salt as needed
﻿﻿
﻿
Break the cauliflower heads into florets with no worries about equal sizing, then sprinkle them liberally with Kosher salt and set the whole she-bang on the kitchen table for a few days (Unless it is very hot out, then set in the fridge).Check after one day, drain off the excess water and sprinkle them again liberally with salt, tossing to make sure every floret is covered.

While your cauliflower is resting prepare your beets. Roasting beets, as with parsnips and other root vegetables, intensifies their flavor bringing out their sweet earthiness. It also makes them easier to peel. Start with beets that are firm and feel heavy for their size. If the beets came with their greens still attached, cut off the greens, wash them, and reserve them for another use.

Roast beets until tender. The amount of time this takes will vary depending on the size and number of the beets, and how fresh they are. For smaller beets, start checking them for tenderness at about 25 minutes. Larger, older beets can take up to an hour.


Preheat the oven to 375°F. Scrub beets clean. Place them on a piece of aluminum foil large enough to packet up the beets comfortably with a bit of 'roasting' room, drizzle with olive oil (just a splash) . Fold the foil over (forming a packet) and crimp the sides closed. Remove beets from oven when a fork will easily pierce them to their center. Let sit until cool enough to handle. Peel and set in the fridge until your cauliflower is ready.

After the cauliflower has set for two days, gather up your canning supplies and prepare to bottle up the pickles. First step: in a large heavy bottomed, non-reactive pot combine vinegar and sugar; bring to a simmer over medium heat until sugar has liquified - do not boil yet. Tie cinnamon stick and cloves into a square of muslin or cheese cloth and float in the brine. Continue to simmer allowing ample time for the flavors to meld (about 20 minutes). 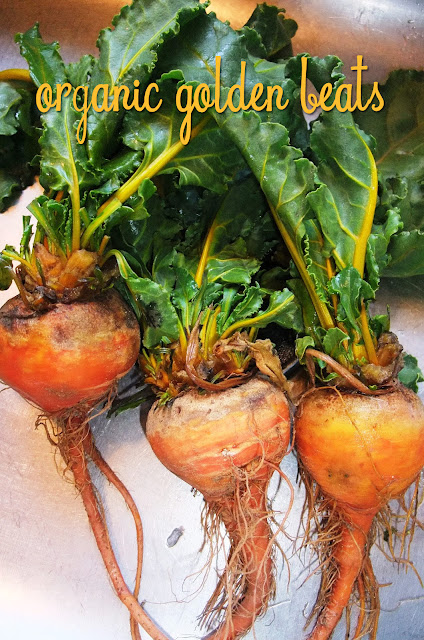 Bring mixture to a rapid boil, then turn heat down - in other words keep the brine hot as you bottle.

Rinse your salted cauliflower florets several times in cool water and let drain. Begin bottling by layering sliced beets and drained cauliflower florets into your sterilized bottles and/or jars.  I bottled up one 2 quart container (pictured below) that went right into the fridge after it cooled, and then I moved to 4 pint bottles that I processed in a canning water bath for 10 minutes, for long term storage in my pie safe now canning cupboard.


Once your jars are full (you can press down the vegetables with your fingers or a spoon to make a tight pack) you can begin to add the hot brine.

This step will make for many air bubbles, which you do not want, so ladle in some brine and tap the bottle gently against the counter to release the air, then add some more brine.  A long thin kabob stick, or thin knife can also be inserted into your jars to release any air bubbles.

Continue this process until the jars are filled with brine leaving 1/2 inch headspace. Follow all your Safe Canning Standards. Wait for several weeks before serving.  This allows the flavors to combine.

These pickles can be left in the pantry for a year, or in the fridge for equally as long.  Because the cauliflower is so dense, even after standing in the vinegar brine for a long time they usually retain a delightful cruchiness.
Posted by E.J. Conn at 6:16 PM