﻿﻿
﻿A spring treasure, rhubarb, the season’s first, and in my case favorite “fruit”, is delicious and good for you. It can be enjoyed throughout the summer, but as far as I am concerned springtime is the best time for rhubarb.

Botanically, rhubarb is a vegetable. A close relative of garden sorrel, rhubarb’s long red stalks are crisp when raw, but cook down into a mush that is perfect for preserves, relishes, chutneys, sauces, and yes, pies.

Rhubarb is often found in recipes that interplay sweet and sour. Affectionately known as the “pie plant”, its classic pairing is with strawberries, as in Strawberry-Rhubarb Pie, but there are so many other culinary possibilities to explore, like pickled rhubarb or rhubarb chutney.

Alice Waters, who likens the tart-flavored veggie to “the smell of earth in spring,” is a fan. Known for its diuretic and anti-inflammatory properties, rhubarb has long been used in natural medicine. Also worth noting, rhubarb is low in calories and high in calcium (almost a third of your recommended daily amount) and potassium, plus minerals, fiber, folate, with plenty of vitamins and iron too, just don't eat the leaves, they are poisonous.

Boil vinegar, honey, salt, ginger and spices until honey and salt dissolve completely(approximately 5 minutes after coming to a slow boil).

Cut rhubarb into batons long enough to fill each jar. For half-pint jars or smaller, slice rhubarb into half-inch pieces.

Pack Rhubarb into sterilized jars distributing the spices as evenly as possible.

Pour pickling brine over fruit, screw on lids, and allow to cool.

Refrigerate for six months or more.

Note: This pickle is best refrigerated, though it can go through a canning process, (Hot Water Bath for 10 minutes) which will soften the fruit to mush, but is delicious on top of a baked brie, or rolled into a pork tenderloin, stuffed into pork chops, blended with cream cheese, perfect for tossing on summer salads - the possibilites are endless. 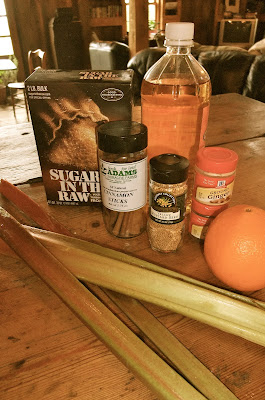 Zest and Juice of 1 Orange

Cut the Rhubarb into 1 and 2 inch pieces. Do not peel.

Over medium heat dissolve the sugar in the vinegar; add the zest and juice of the orange, and  the ginger, mustard seeds, cloves, and cinnamon.

Bring to a slow boil. Simmer carefully for 10 minutes.

Place Rhubarb (same as recipe above) carefully in sterilized jars. Reduce the liquid by boiling until syrupy.

Pour the syrup into sterilized jars to ¼ inch and seal.

Then either let cool and place in refrigerator for use up to 6 months OR cure in boiling hot water bath for 15 minutes and keep on pantry shelf for up to one year.

I found this recipe in an older issue of New Zealand Woman’s Weekly. They called this a pickle, but it seems a bit more chutney-like to me, so my version is called Rhubarb Chutney. I did the conversions for you. This one I am finishing in a hot water bath and putting on the pantry shelf for gifts. Of course, the article noted that this recipe goes quite well with spring lamb.

Wash rhubarb. Trim ends, removing any leaves. Cut into 2 inch pieces. Place in a non-metallic bowl. Peel onions and chop roughly. Place onions in a second non-metallic bowl. Sprinkle salt over rhubarb and onion. Cover both with warm water and leave for six hours or overnight.

Bring undrained onion mixture to the boil in a large saucepan. Add raisins (or cranberries), rinse and drain Rhubarb and add to onion mixture with vinegar. Cook until rhubarb is soft.

Stir in sugar, curry powder, mustard and pepper. Return to the boil.

In small bowl whisk cornflour and second measure of vinegar to form a paste. Stir slowly into hot Rhubarb mixture and let boil gently until thick.

Spoon into hot, clean jars and seal. Cure in Hot Water Bath for 15 minutes. Keep in pantry for up to one year.

You may choose to preserve food at home to save money, to have greater control over what you consume, or just for the joy of it. Regardless of the reasons, it is important to do it safely. Using the proper equipment, as well as following recommended guidelines and recipes can ensure that the food you preserve at home is safe and delicious.